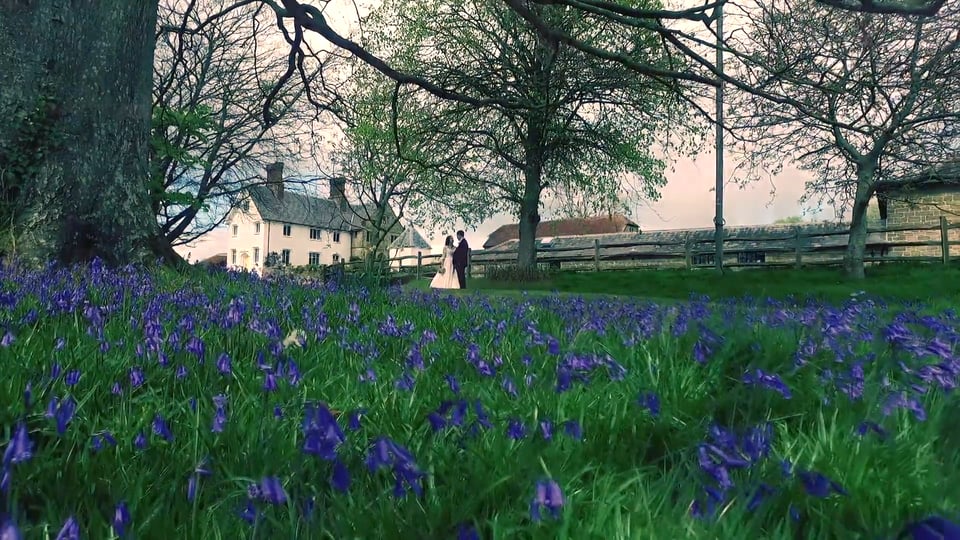 We were delighted to be asked to film Harriet Ellis’s wedding particularly as we knew Harriet from working at Hever Castle and when we first discussed her wedding Harriet told us which suppliers would be involved in the day we just knew it would be wonderful.

Harriet her mother and the bridesmaids all stayed at Hendall Manor Barn the night before the wedding so I arrived there to film some of the bridal preparations.  Hendall Manor Barn is a stunning venue in an idyllic setting in East Sussex. Surrounded by stunning views the accommodation was a converted 17th-century barn.  It was light and airy plenty of space so brilliant choice for bridal preparations.  Eloise Willett and Chloe Butterfill were the hair and makeup artists.

The actual ceremony was held at St Nicholas Church in Ilford which was one of the most charming churches we have ever filmed in.  Harriet’s grandmother had been the churchwarden here so there was a very strong family connection.

Lisa from Lily and Myrtle supplied the stunning flowers, the arrangements throughout the church were beautiful and very tasteful.

As grooms go Ellis kept his cool and did not look too nervous.  Harriet’s father escorted her down the aisle she looked absolutely beautiful in her pink bespoke wedding dress designed by Judy Mott.

Harriet and her family all classical singers so it was just breathtaking to listen to the incredible singing throughout the wedding ceremony. During the signing of the registers Harriet’s father sang which was just such a lovely touch to the day.

After the throwing of the confetti we all travelled back to Hendall Manor Barn.  The couple had laid on a special double-decker wedding bus for the guests… “The Wedding Special”

Whilst we had been at the church the venue has been decorated with an abundance of spring flowers – it looked beautiful.

We then accompanied Helen England on the photo shoot…  there were so many great places for photo and video at Hendall Manor Barns we were just spoilt for choice.. The icing on the cake was the carpet of bluebells that we found. As the couple had booked our Gold cinematic package we were able to use our specialised equipment so that we could capture some sweeping dramatic shots.

After the sumptuous wedding breakfast were the speeches that were very entertaining and included a very amusing slide show from the best man.

We managed to take the couple outside for a couple more shots before the first dance and we were blessed by possibly the most stunning sunset that we have ever filmed at a wedding.

Other suppliers for the wedding were